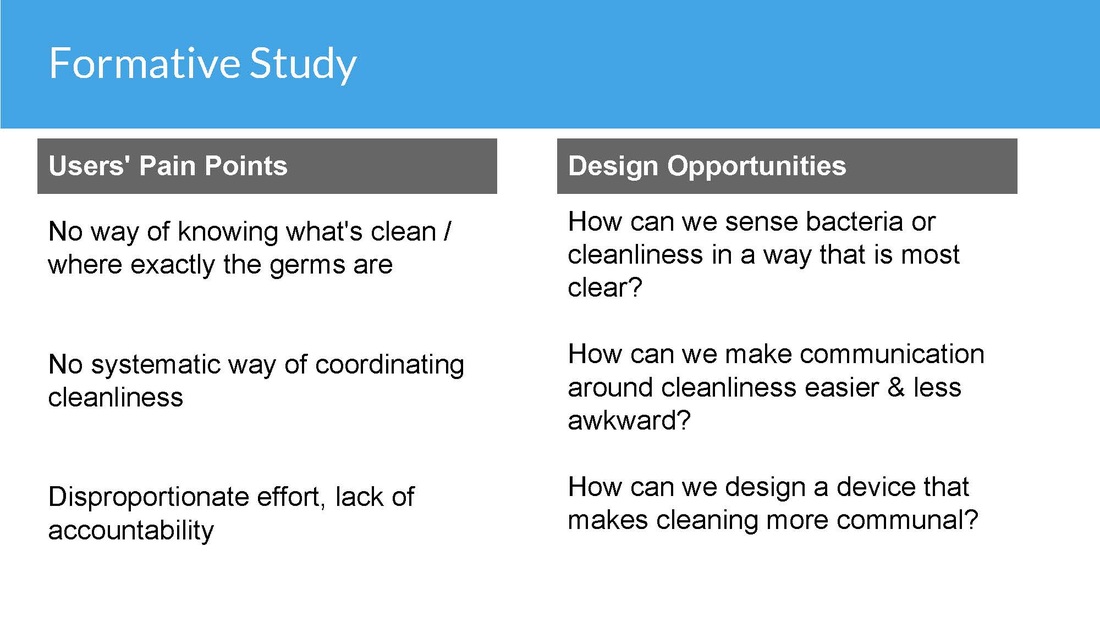 For designing our user enactments, we started by generating a wide variety of ideas about different scenarios around people’s decisions to start cleaning. Our goal was to generate as many different ideas, group them into common themes, and have people in our target interact with these lower fidelity prototypes in a contextualized setting. After we conducted these user enactments, we clustered our observations and notes into themes based on the following standards.
We conducted the user enactments in a shared kitchen space at the Foundry. We recruited five participants in our target audience - college students or young working professionals who live with roommates - for six user enactments. We had more male participants to address our earlier disproportionate representation of women in our diary studies. We situated each of the lower fidelity paper prototypes in each space. After participants acted out each scenario, we followed up with short interview questions to get their emotional responses and feedback on the user enactments. We had at least one person taking notes at all times and took photos. We referred to these thorough notes and photos for our affinity analysis. We had a disproportionate representation of University of Michigan Master’s students. 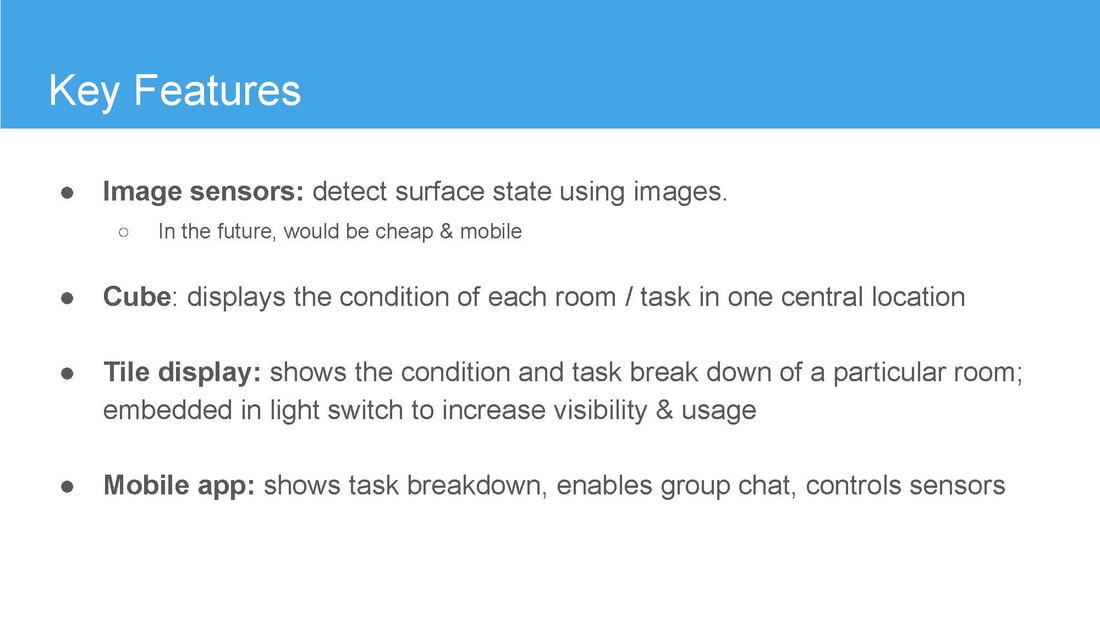 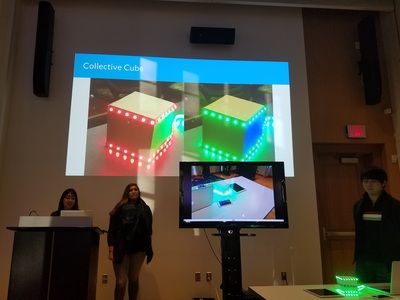 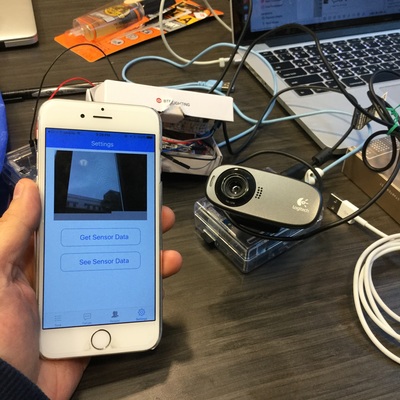 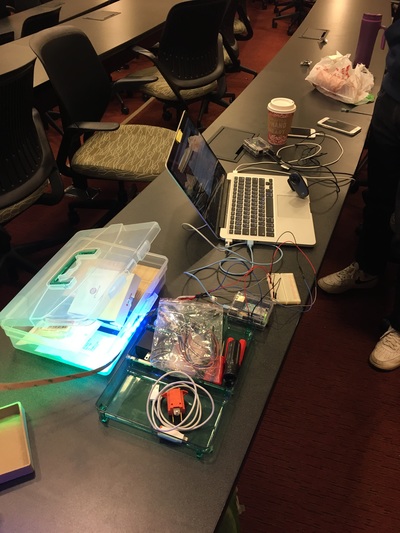 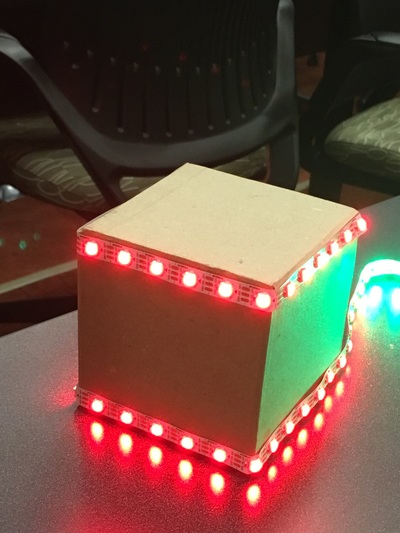 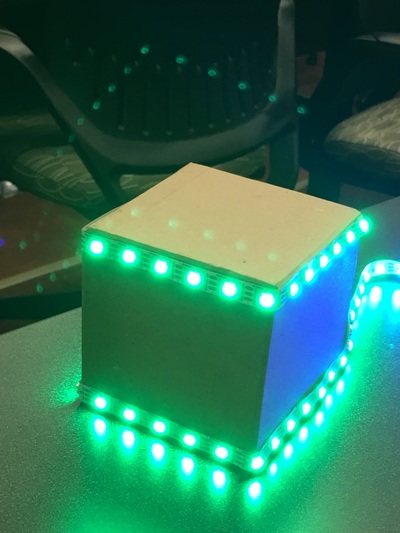 HyCube is a smart home system that facilitates the monitoring of cleanliness of core surfaces in the home through the use of sensors and contextualized tile displays. The goal and motivation of this product is to enhance people’s ability to detect and address unwanted germs, dust, and bacteria and coordinate communication between roommates to keep collective spaces clean. In our formative study, we conducted diary studies and follow-up interviews to understand how people are currently monitoring the cleanliness of spaces and working together with their roommates to complete cleaning tasks. Based on our findings in our formative study, we designed HyCube to:

We would have liked to connect the image sensors with the cube to make it reflect the actual level of cleanliness for each space. This would be a great next step to strive for in developing the product. It would be great to have each side of the cube provide a camera view of each space so that users would be able to monitor the condition in real time. Another next step would be figuring out how to surface all of this information, including the sensor visualization on this tile, which will be integrated into existing light switches.

Our product would depend on whether people are able to buy sensors and how mobile these sensors would be. We are assuming that these sensors would be able to fairly detect the overall cleanliness of a space. It is also possible that putting certain props or accessories that carry bacteria and germs, such as one's cell phone, could launch false alarms. We also acknowledge that this product may empower those who care a lot about cleanliness and may contribute to some tension and stress among roommates, but we believe our product will at least support constructive, informed conversations about how to better support health and cleanliness in the home.

We would also need to think carefully about the technology that could actually detect cleanliness. We believe image sensors would be one way, but we would like to continue doing research on other technologies and tools that could detect bacteria and germs more effectively and efficiently.

From this entire project, we learned that everyone measures, perceives, and responds to cleanliness differently. Since we focus on those who live with others, we knew that it would be important to understand, and design for, different roommate dynamics (positive, distant, and negative) and people with varying levels of investment and interest in cleaning. We realized the importance of preparing the image sensors to measure the level of cleanliness and alert the user through changing the colors on the cube; this requires little of the user as the system will passively collect information about the space and communicate it with the user.

We also noticed the importance of creating a strong narrative arc to explain how the cube, mobile app, and contextualized display would communicate with one another. The cube alone would simply not provide as much contextualized information and would serve as a collective monitoring tool, constantly reminding the roommates that the cleaning covenant they have agreed to respect. For controlling the settings on the cube, a mobile app was needed; this requires more input from the user, but allows them to be connected with their roommates through a group chat and holds them accountable to assigned cleaning tasks.

​The tile display would be embedded in each surface and provide specific guidance on where and how to clean the spaces. The tile provides richer information than the cube by giving more of task breakdown and instructions on how and where to clean, but still allows users to understand how clean their space is without having to interact with a mobile app. Through our research, we learned that people wouldn't mind learning about the condition of their home through their phone while they are away (e.g. getting a notification from a roommate that they cannot complete their tasks), but would like to minimize how much they have to use their phone while they are at home for this type of information. The tile allows a user to see the general information about the condition of the space that they are in as well as a specific breakdown about it.