Our team is focusing on the context of cleanliness in the home; specifically, how to support those who live in apartments or houses in their desire to have and maintain a clean home. For the sake of having a specific scope, we have eliminated notions of order from our conception of cleanliness. As we discovered in preliminary observations and discussions with potential users, cleanliness is dependent upon a lack of dirt, dust, odor, hair, and bacteria, while order has to do with tidiness or organization of a space. Since we focused on a specific context, our population of interest is a bit broader, but includes those who share a home (parents, roommates, pets) and those who seek to keep a clean home. We decided to focus on this domain because we all agree that while people generally like to have a clean home, it can be arduous to sustain a high level of cleanliness. We believe that there is great potential for a lot of innovation in the way of helping people track and maintain the cleanliness of their homes by leveraging smart technologies that have conceptually been explored. 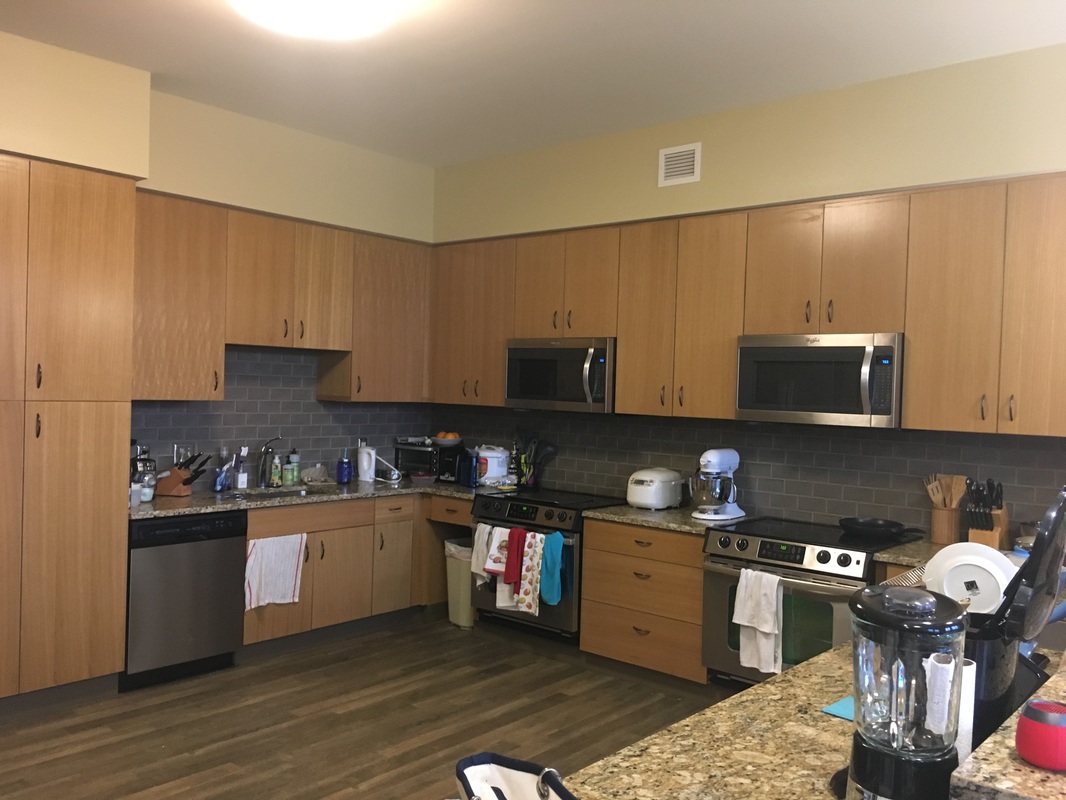 People prioritize the cleanliness of their kitchen and bathroom(s) over the other rooms in their house/apartment.


People have a hard time knowing what is actually clean.
People who share a space with roommates have trouble organizing, coordinating, and communicating cleaning efforts and hence securing the health of their residence. 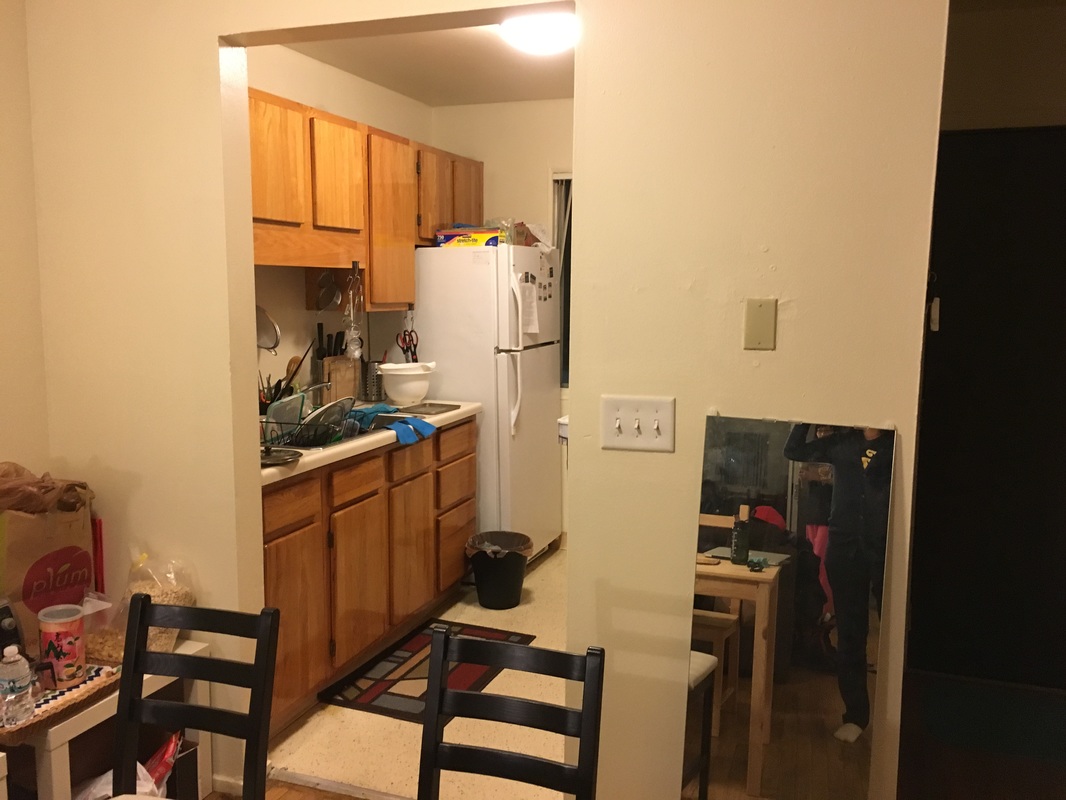 After we conducted our observations and preliminary discussions about cleanliness, we got together to share the information and themes that we found. We decided to focus on user pain points, goals, and possibilities for meaningful design solutions. We then looked for ways that we could appropriately synthesize and refine our initial set of ideas, and continued to winnow down until we had three distinct concepts. We fleshed out those concepts and tied them to our key findings, making sure that they were relevant to our observations and the information we'd gathered and still within our scope. We complemented our idea set with additional observations to validate the concerns that we decided to address and gather additional information we may need moving forward. 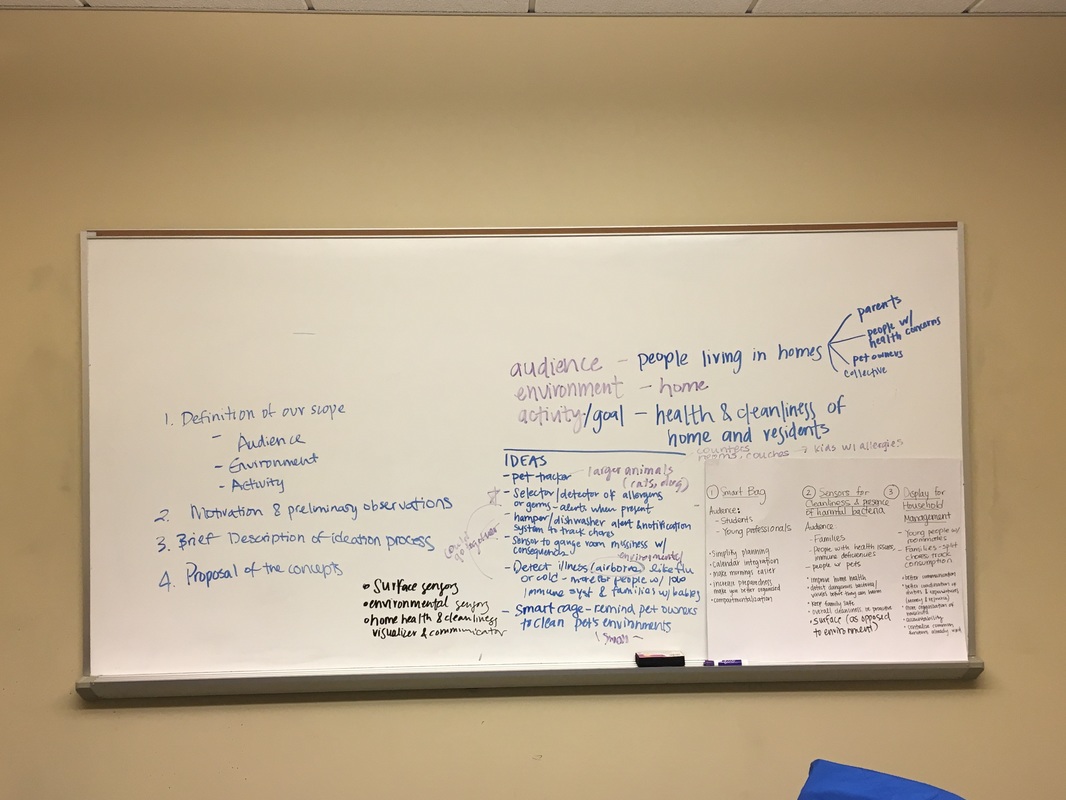 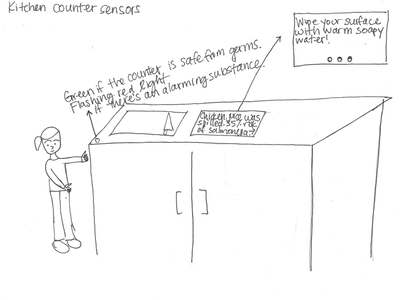 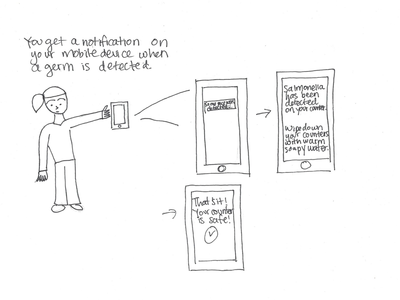 Concept 1: Bacteria-Detecting Surface
For our first idea, we wanted to come up with a way to address people's concerns about whether or not their countertops or surfaces are truly clean. We conceptualized a surface that can detect harmful bacteria, alert users that the surface needs cleaning, and make recommendations about how to clean the bacteria. For example, if there was raw meat that touched the counter, the sensors would detect that they'd been in contact with raw meat, would change color and alert the user that it needs cleaning. It would then tell the user how to address the bacteria. Users would be able to indicate their allergies or health concerns so that when those things are detected, users can be sure to clean appropriately. The surface would always be collecting data, but only send alerts when a certain threshold is met or when it detects something you've indicated as being high-priority for alert. 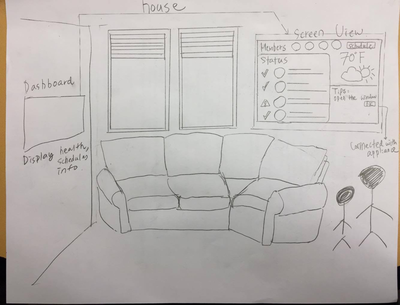 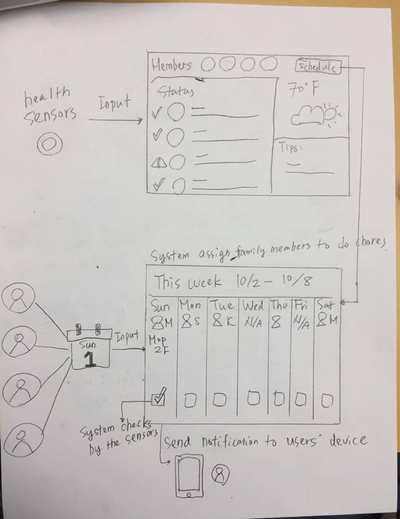 Concept 2:  Home Health Visualizer & Communicator
For our second concept, we focused on the communication surrounding cleaning and maintaining the cleanliness of a shared space (as with roommates or parents). This concept would manifest itself as a display that allows for the scheduling and management of cleaning tasks and chores, tracking if, when, and by whom the task was completed, and would provide some instructions about how to best complete a task. Beyond this feature, we wanted to include a way for users to communicate about the overall health of a space. For example, if one roommate is sick, they can indicate that on the display so that other roommates know to stay away from their bedroom and bathroom until they are better. This device would serve both young roommates or friends that live together as well as families and parents who want to teach their children how to do chores and the value of keeping a clean home. 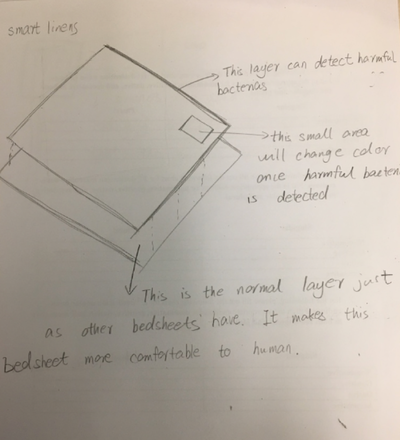 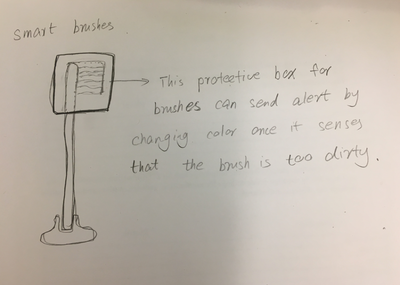 Concept 3: Smart Linens and Brushes
For our third concept, we came up with an idea for linens and brushes (e.g. sponges, dish brushes, toilet brushes, etc.) that can communicate to the user when they need to be cleaned. People have trouble remembering when their linens were last washed or cannot always tell how bacteria-ridden their towels and brushes are, so we have designed a set of linens and other cleaning tools that let users know when they need to be cleaned by changing color in a certain area. A brush, for example, would be contained within a box that would read the bacteria level on the brush and display a certain color to let the user know that it should be cleaned. A linen would have a small piece of smart fabric with sensors that will do essentially the same thing as the brush's box: read the level of bacteria on the linen and change colors to alert the user to clean them.
Powered by